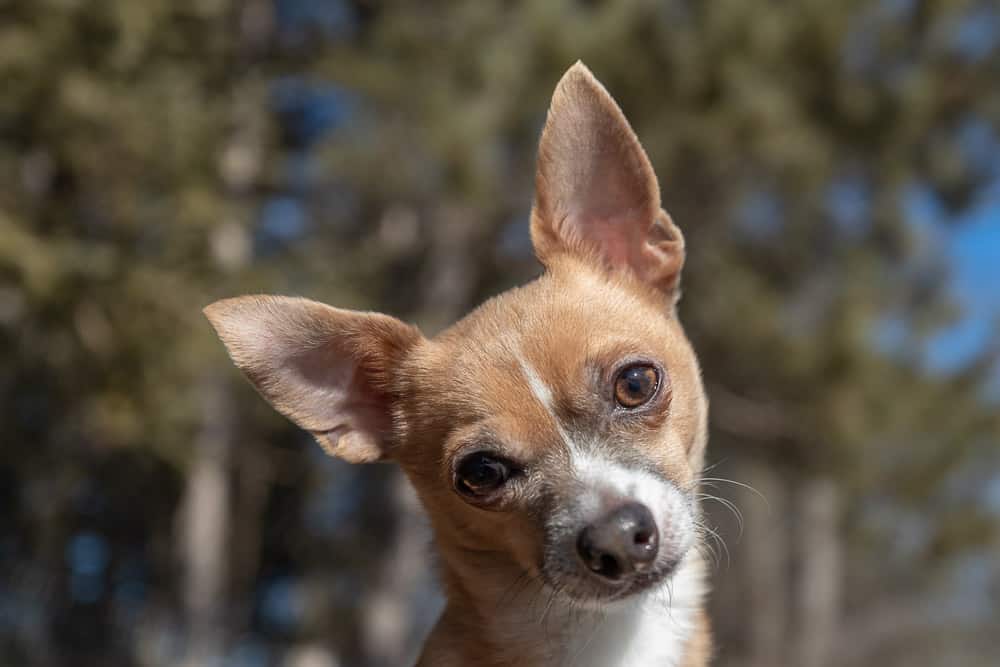 The Rescued Dogs Project has highlighted dogs that were abandoned and waiting for a family. There were homeless puppies, a mama dog that lost her babies, a dog without hearing, and a dog without hind legs. One dog had heartworm and was also shot. Sometimes, though, a dog’s history is unknown. This is the case with Trapper, the next dog in my Rescued Dogs Project. For Trapper, his story is not only how he was saved by Emily, but how Emily was saved by little Trapper. Trapper became Emily’s Emotional Support Animal (ESA).

Rescued from the Streets 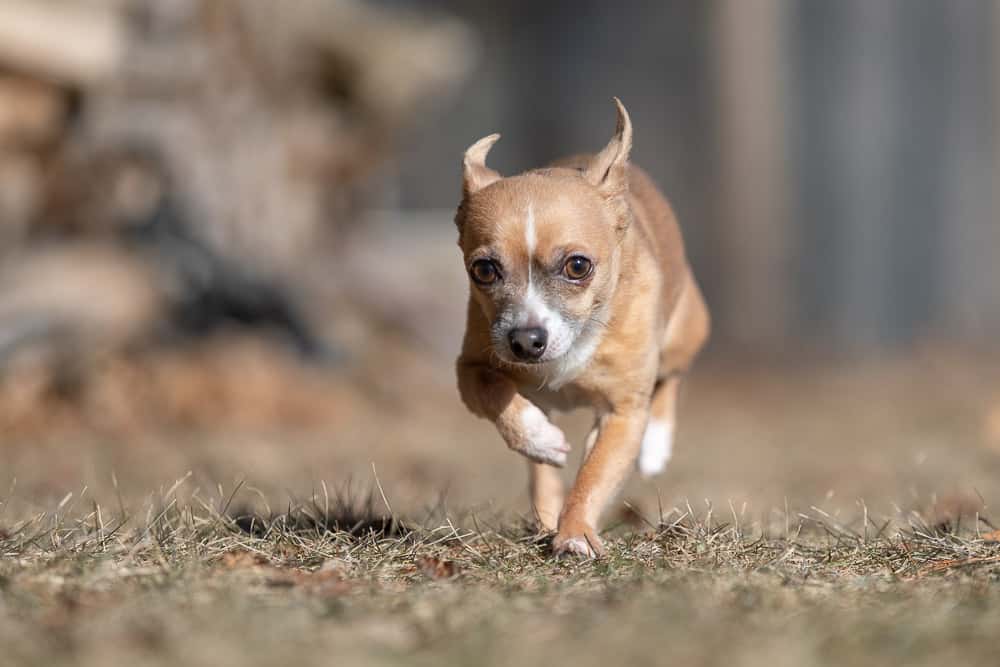 Trapper was found as a stray by Milwaukee Area Domestic Animal Control Commission (MADACC). He was chipped, knew to go outside to relieve himself, and knew his name. Sadly though, no family came for him. Trapper was frightened and alone. What happened next is best told by Emily herself.

I was first diagnosed with anxiety and depression in high school. This was my family’s first encounter with mental health, so we probably were late noticing the signs and didn’t always handle everything the best. Throughout high school I was in and out of therapy and on and off medication. In college, I pretty much decided to fend for myself and let my mental health slide to the back of my mind. It was only after my sister opened up to me about having an eating disorder that I started to go back to therapy.
I became my sister Alex’s primary source of support. At the same time, I was getting my degree in psychology and was the only one in the family who had dealt with mental health before. I was also just engaged, planning a wedding, and trying to find a place to live with my fiance. During this time, we found out my mom needed surgery for something her mother also had (and caused her passing). Oh, and I was starting law school…ALL AT THE SAME TIME. Crazy right? I didn’t even realize it at the time, but I was taking on way too much without even thinking twice. 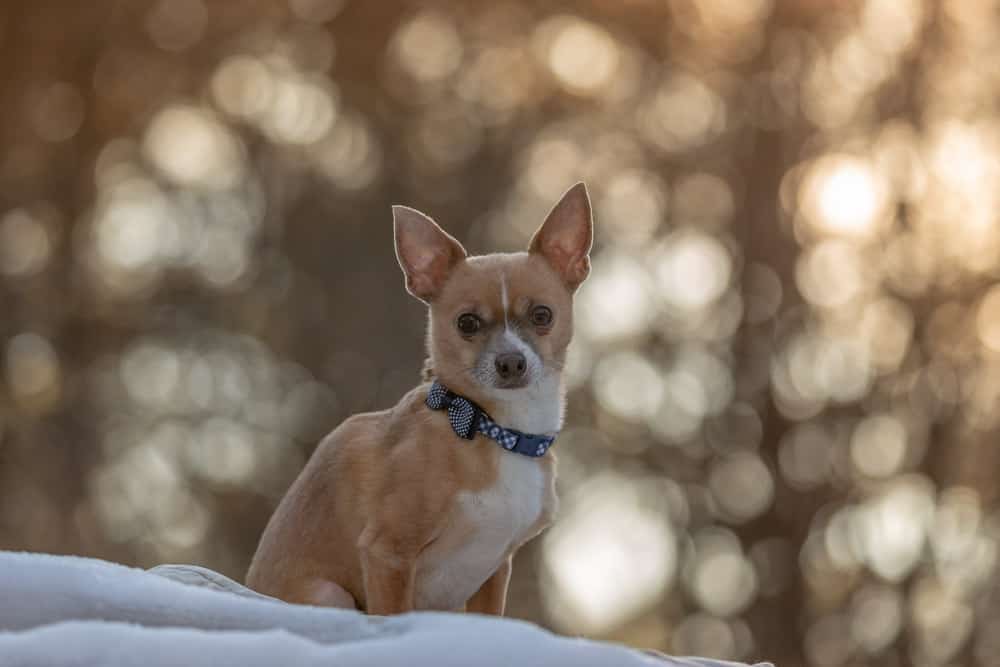 Law school orientation is a two day affair. The first day I was nervous and quite sick the morning of, but I took my anxiety medication and crushed it. The staff was great and I was already ahead on some of the work given to us. I even made some new friends which is NOT something I do. Everything was going way better than expected. Skip ahead to day two. Still nervous as heck but was able to talk myself down and get to our first mock class. I sat with my friend and was chatting and fine…until the class started. The professor started talking and I was hit with the worst nausea of my life. I tried taking deep breaths, but my peripheral vision started going dark. I did not want to be the kid that fainted during her first law class.
Walking out of the classroom, I stumbled to the bathroom where an hour felt like minutes. Although I took emergency medication for panic, I was still overheating, couldn’t breath, the room was spinning, and I lost feeling in my arms and legs. I KNEW it was a panic attack, but it FELT like I was dying. Somehow I told myself to stay where I was and wait it out, knowing that physically my body could only panic for so long before it would end…but it didn’t. Without any other options, I texted my husband Jon who came to pick me up from law school. 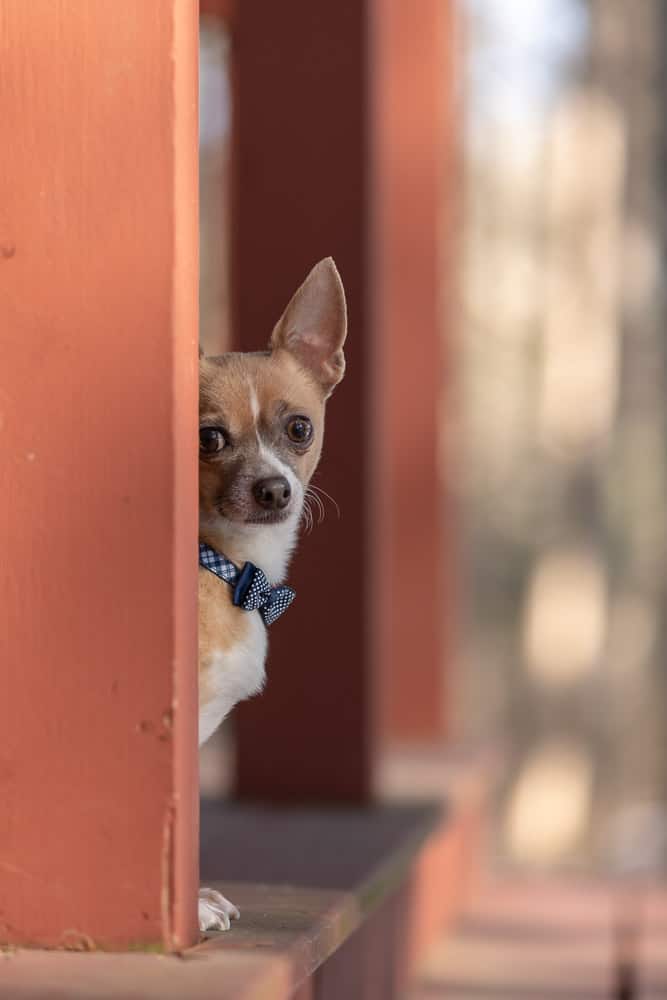 I spent the rest of the night huddled on the bathroom floor. Not knowing what to do, Jon drove me to my parents house thinking I would relax there. Unfortunately I couldn’t even lay on the couch. I felt like I was floating out of my body and I was shaking and nauseous.Hours were spent laying on the bathroom floor (it had now been 2 days of constant panic). I called my therapist who recommended I get to urgent care. Urgent care confirmed it was reoccurring panic attacks and doubled my medication. It was explained to me that I was allowed to go home only because my husband and parents were with me and I would never be left alone. Monday morning I was still not back to normal. It was clear I couldn’t start school and I scheduled emergency appointments with my therapist and a psychiatrist who diagnosed me with panic disorder.
The next two months were the same. I never left the house, I only ate goldfish crackers, and my husband couldn’t leave without my symptoms escalating. I didn’t feel safe in my body and I would see creatures that weren’t there. Also, I would hear voices. If Jon called me on the phone I wouldn’t believe it was really him. There were times I didn’t believe who I was or that my life was real. I couldn’t be alone, medication wasn’t doing enough, but we needed Jon to be able to work so that we could afford to live. So my psychiatrist, Myra, suggested an ESA. When she asked if I would like a dog or a cat the answer was easy: DOG! 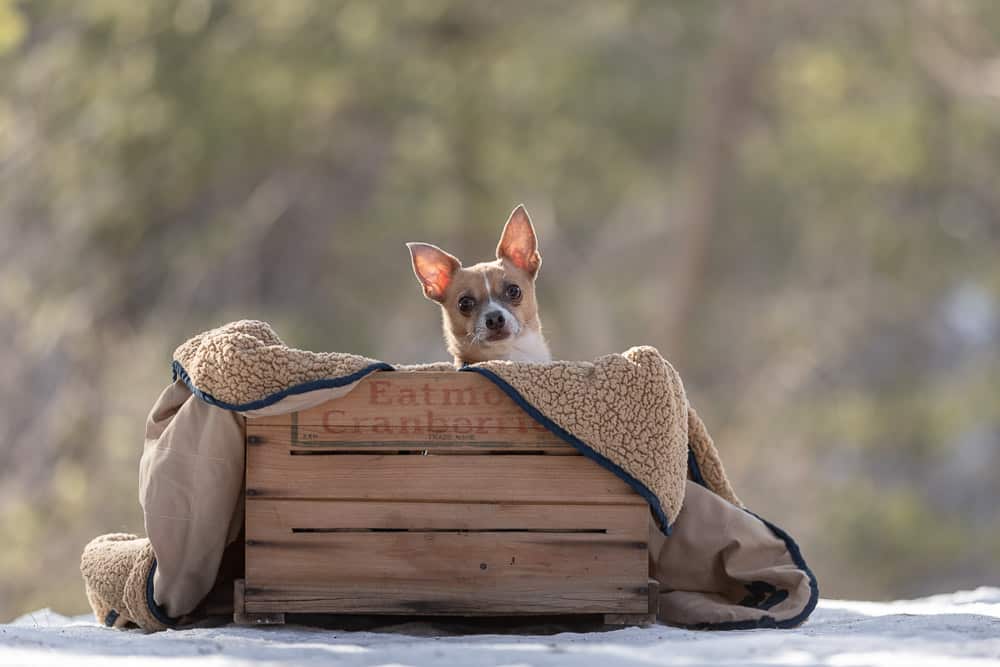 Searching for an ESA

We started our search for a dog. Jon is allergic to just about everything and we knew we wanted to rescue. There are lots of benefits to rescues, but the biggest one for me was that I could see his or her personality and see if it would fit my situation. I needed someone calm that wouldn’t be scared of me, and it would be helpful if the dog was already potty trained. After reading about “Velcro dog breeds”, I learned these types of dogs like to be with their owner 24/7. Since we were in an apartment, smaller breeds like the chihuahua were suddenly at the top of my list. One day, I came across a little chihuahua mix on Petfinder with the same markings as my beloved childhood dog Sherman and I knew I had to meet him. I had already scheduled an appointment with Senior’s Rock (a rescue based in Waukesha, WI), so I quickly called them and requested to meet with Trapper.

On the day of our meeting my husband knew IMMEDIATELY that Trapper was the dog for us, but left it to me to decide. I loved all of them; each was very different in their own way. Trapper climbed up into my arms and fell asleep there despite being nervous of his surroundings. It just felt right. We paid his adoption fee that day and couldn’t wait until the day we could pick him up (he was new to the rescue and hadn’t seen a vet since he was picked up by animal control). 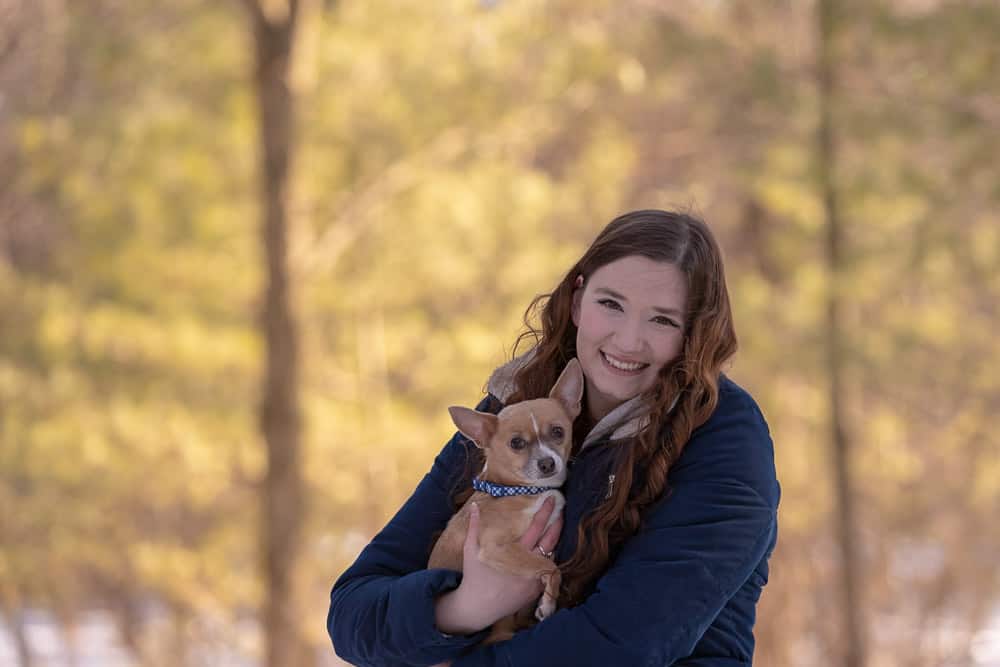 We didn’t know a lot about his background and we spent the next few days dreaming up names for our new little guy that would make us a family (I can’t have children while I am on the medication I am taking, and I can’t live day to day without the meds either). He was picked up by animal control and transferred to Senior’s Rock because of how scared he was and that he refused to go to the restroom the entire time he was there. When we brought him home it was pretty clear to us that he knew his name very well and would come to us if we called. I can only believe this little guy had a family who taught him his name, where to potty, and how to sit and walk like a dream. Although I don’t know what happened in between then and him arriving at animal control, I am very thankful he is with us now.

The first night we brought him home, Trapper curled up and laid on my chest. I have NEVER had a dog do that before and it nearly brought me to tears. This is something psychiatric service dogs are sometimes trained to do to ground a person during panic (much like a weighted blanket). I do use a weighted blanket, but with all 10 lbs of Trapper right on my chest it is just the right amount sometimes. He also doesn’t bark…unless someone is knocking on the door. This is a nuisance for some, but I have a fear of someone trying to come to my home unexpectedly, so him alerting me allows me to do things like hop in the shower or take a nap without constantly needing to check my front door for people. It is also helpful to have an animal in the house because if I see or hear something that I am unsure of, I can look to him for a reaction. If his big ol’ ears don’t hear it and his beautiful big eyes don’t see it, then I know its not real. Finally, he never leaves my side. Even if I am scream-crying during a panic attack, he is in my lap. Seriously, a chihuahua not scared of someone screaming? Even I don’t believe it.

Not a Service Dog

An ESA is not a service dog. Trapper is just a pet, but for me, having a pet allows me to live independently. Under the law, what I deal with is considered a disability. The Fair Housing Act considers a pet a reasonable accommodation for my disability which allows me to have Trapper and not worry about being denied an apartment. We still choose to live in pet friendly housing to be kind to our neighbors and landlords (dog people are the best people); however, our current apartment complex has breed restrictions that include chihuahuas. Thankfully, we are exempt from that clause. I hate that it exists in the first place. Chihuahuas are the second most euthanized breed in shelters right behind Staffordshire Terriers. There are also some travel protections for ESAs like waived airline fees. We do not utilize those as it would be stressful for both Trapper and myself to put him in that situation. 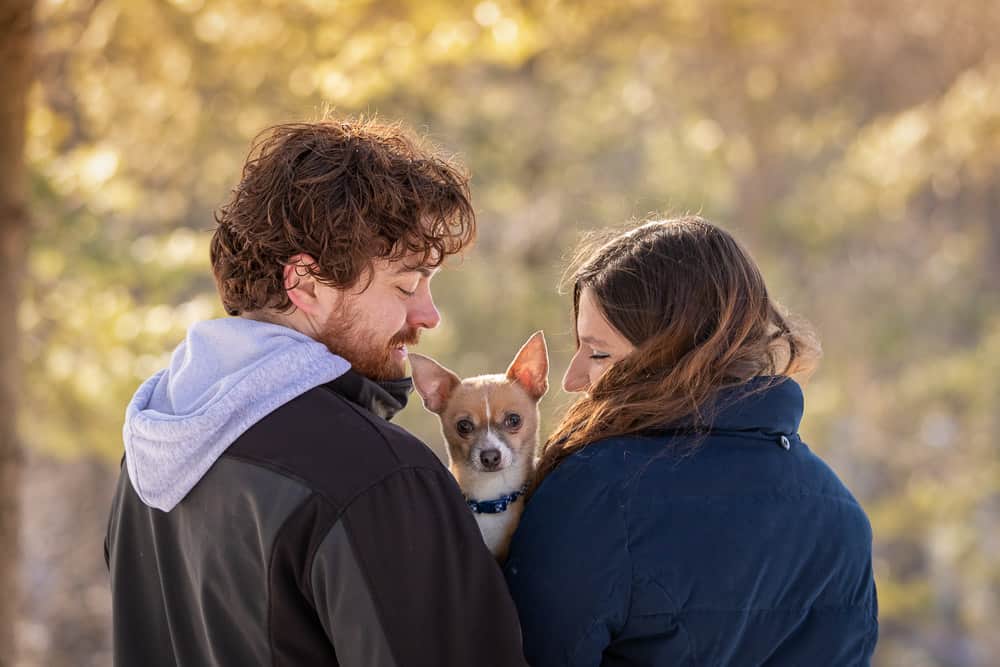 I know all of that sounds really heavy, but honestly Trapper is just a normal dog. He plays with squeaky toys and does treat puzzles. Trapper loves to snuggle with blankets and take walks in the sunshine. He hates getting his nails clipped, and will shake with intense anticipation at dinner time. Trapper even uses his little paws to pull your hand in for a tummy rub (this is my FAVORITE!). Oh, and I can’t forget, at the end of the day he grabs his favorite toy (doggie) and brings it to bed with us. All in all I have been blessed with this little 7 year old rescue who has made my life whole.   — Emily

My heart is full for both Trapper and Emily. This is a match that was meant to be; it was supposed to happen. So often we enrich the lives of our dogs, after we save them from a terrible past. But sometimes it is the dog who saves the person, and makes a “normal” life possible. I’m extremely grateful to Emily for sharing her story. Mental health is critically important and should be openly discussed. We, as a society, need to move past the stigmas associated with mental illness. We need to show compassion and be willing to provide support. We’re all in this life together, let’s encourage one another, and help lift each other up.
IMPORTANT: If you or someone you know is suicidal or in emotional distress, contact the National Suicide Prevention Lifeline at 1-800-273-TALK (8255). You can also visit mentalhealth.gov for more resources.